>As a geographer, I am fascinated–and actually study–extreme natural events.  Biologist have life lists of birds, but I have a life list of natural events.  Having grown up in the Midwest US, I have experienced tornadoes, ice storms, the floods of ’93 in Iowa, blizzards, hail (destroyed my roof), droughts, micro-bursts that brought down several blocks of mature maple trees, and lightening (destroyed my VCR).  I even have a hurricane on my list from when I lived in Louisiana.  And I was lucky enough to be on the coast of Massachusetts when a Northeasterly hit–it took two of us to push our motel door closed against the wind.  I was in California when a good sized earthquake hit in the middle of the night near where I was staying.

So it was with great interest when a typhoon warning was posted in Hong Kong last week.  Most typhoons come later in the summer, much like hurricanes.  Both times I have come to live in Hong Kong in the off-season in terms of these storms.  But at least this second time I have been here later in June, when the direct rays of the sun are over Hong Kong, located near the Tropic of Cancer.

This is the first time I have been at a latitude at a time of the year when the sun is directly overhead at noon.  I’ve been watching to see what I can discern in terms of the daily weather.   The Inter-tropical Convergence Zone (ITCZ) is associated with these direct rays–the heating of the earth’s surface causes the air to rise, drawing in surface air from north and south to fill the void left from the rising air.  As the air rises, it cools, causing the very high levels of moisture to condense and give off heat energy in the process, reinforcing the air’s tendency to rise (and low pressure).  Of course this means rainfall and typhoons are spun off in this process as well as fueled by the incredibly warm ocean.  And the ITCZ moves north and south with the seasonal shift in the relationship between the Earth and Sun.

A satellite image with weather information, produced by Westernpacificweather.com, shows the location of the ITCZ and the typhoons that have been spinning off the past couple weeks.  We have only had a typhoon warning level 1, but the overall daily weather has turned more tropical. Daily I experience both clouds and clear patches.  Everyone is carrying an umbrella to either protect them from a cloud burst or the sun.  This is the daily pattern–showers interspersed with sun throughout.  Most of the rainfall is from convection–rising air from the heating of the earth’s surface by the sun.  Add the high levels of humidity, with ocean temperatures of 27 degrees C or 82 degrees F (!), and it takes very little rise for the air to reach saturation point.

This is the process that causes the rainfall to increase over the summer in Hong Kong (pink bars).  January through April are actually quite dry, but once the ITCZ starts to move north, the rains (and typhoons) come with it.  Besides the high humidity–rarely below 80%–the temperatures do not drop at night time.  The past few weeks, the lows have been around 28 degrees C (82 degrees F), with the highs around 33 C (91 F).  The highs don’t seem so bad, for someone who has grown up in the Midwest, except for the lack of cooling in the evening and the high humidity.

On the human behavior level, everyone carries their umbrellas and as you enter buildings, you are supposed to put your umbrella in a contraption that packages it in plastic to keep it from dripping on the floor.  Always people are mopping up puddles along walkways, or just inside doors to keep everyone from slipping.

It has been interesting.  But I really wanted to add a real typhoon to my life list. 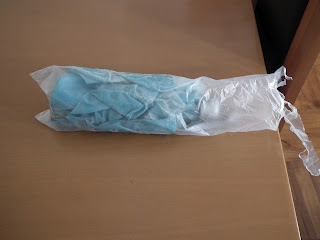 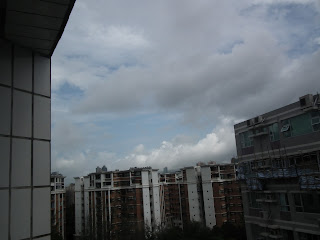 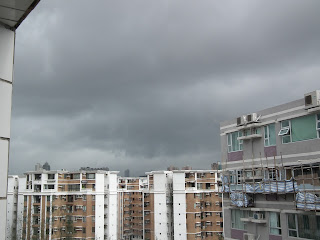