>Hong Kong and the adjacent region of China is a land of immigrants.  In 1949 the population of Hong Kong was one million.  Today it is over seven million.  This means that almost everyone is from somewhere else.  But this “elsewhere” is not often talked about.  The migration into Hong Kong often involved fleeing poverty, war, and political oppression.  One of my friends told me that her father, as a teenager, fled with some siblings.  They had to swim across a rive and then crawl under a train and hold on in order to get across the border.  Her father saw at least one of his siblings drowned along the way.  You always get the sense in Hong Kong that people are trying to keep their options open because you never know what will happen.  If you can, send your children abroad to study and make sure they learn English.  Go abroad for awhile so you can get residency and maybe a passport from someplace else.  In many ways they represent the Chinese people in general who have migrated to all parts of the world in search of opportunity and stability.

Shenzhen, the industrial region across the border, had a population of 300,000 in 1979.  That is 300,000 people spread across quite a wide expanse of territory–2000 square kilometers (in comparison to less than 800 square kilometers of NYC).  Thirty years later, Shenzhen had more than fourteen million.  And the average age of the population was 27.  It has gone from farming villages to global industrial part in this time period.  If you own any manufactured object in the U.S. at least parts of it probably comes from Shenzhen.  One faculty I visited was making a great variety of plastic molded pieces from plastic pellets from Saudia Arabia for the U.S. market.  The transformation of the Pearl River Delta into this industrial area has involved the movement of manufacturing from the U.S. to Hong Kong to the region around Shenzhen.  It moved across the border to Shenzhen when the Chinese government began to set up Special Administrative Regions where the investment and “the market” was allowed to reign.  This was the first of these regions.  As manufacturing has migrated across borders, those places left behind have had to adjust their economy.  Hong Kong has become largely a service-economy. 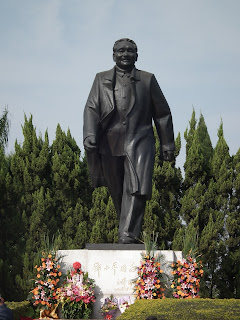 Deng Xiaoping, who established the “open” regions of China 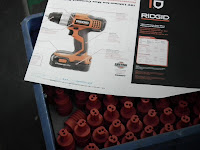 Shenzhen is the border town equivalent to a Mexican border town.  You can take the train from Hong Kong to the border–10 miles from where I live–and walk across the border to an enormous “mall.”  I’ve been there once and never want to go back.  It is like walking into a maze with people trying to pull you aside and into shops.

A U.S. consulate employee decided to go visit the mall with some co-workers to so some shopping.  They all had diplomatic passports so they had to go through a special line at the border.  By the time they got to the mall all the shops had closed–the word came from the border that U.S. officials were coming and believe me, there is nothing authentic in the mall, but everything is name-brand.  I think you get the picture.

If that was all I had ever seen of Shenzhen I would have been left with a very dismal picture indeed.  But Shenzhen must change itself into a place from which actual new ideas come.  It can no longer exist as the low-wage manufacturing center of the world–air pollution is terrible;  wages have begun to rise;  other areas of the world are now becoming competitive when it comes to low wages.  Shenzhen is trying to become a “cool” city, drawing the educated and innovative young.

One recent newspaper headline (SCMP) on the region read:  “Days of Manufacturing Glory Appear to be Over.”  Factories are moving inland.  Orders are down because of the global recession.  Another headline read (SCMP):  “Shenzhen seas seriously polluted.”  The articles says that only 38 percent of the coastal waters off the city were found to be clean.  Contamination comes from sewage, inorganic nitrogen and phosphates, and heavy metals. I’ve seen fish farms in these waters. 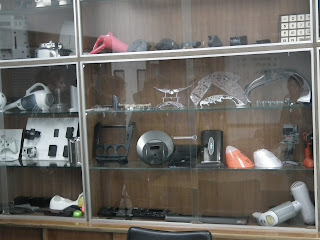 And whenever I start to feel self-righteous, I remind myself that I have relatively clean air and water at home–accomplished over the last forty years–primarily because I buy my manufactured goods from Shenzhen.