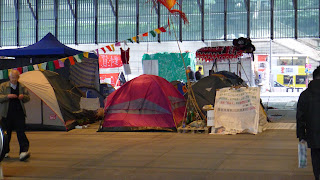 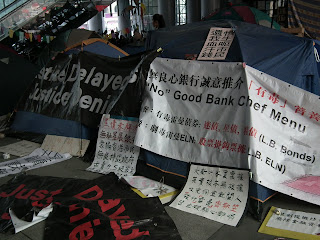 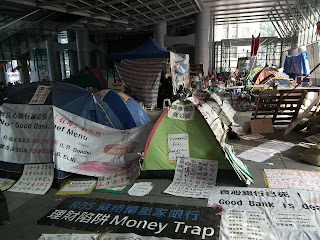 No doubt, few have heard of Occupy Hong Kong. It is located on the first floor of a bank building in Central, Hong Kong Island. The bank is built to be open on the street level. Let me say–it is small–a few small tents, a few people and a few signs. Very few people question capitalism in Hong Kong.

On Sundays, all the domestic helpers from abroad “occupy” Central district because it is their day off. They are the visual reminder of the movement of labor as part of global capitalism. The domestics work for around $500 a month, 6 days a week, 24 hours a day. Legally they must live in the houses where they work and may not pick up any extra jobs. They also work on 2 year contracts. The goal is to use their labor but not allow them to establish residency. We interviewed a few on a Sunday and it was clear that they were financially better off by being in Hong Kong, sending money home to the Philippines or Indonesia. But they are legally vulnerable. On Sundays they sit in all the parks and on the sidewalks of the financial district of Hong Kong.

Here we have it–young people occcupying a space to protest capitalism; a bank providing shelter for domestics from abroad; the domestics work to send money home to send their young people to school so they can get better jobs; the international domestics are being displaced by the young people protesting the globalization of capitalism.

Doesn’t anyone talk to each other? 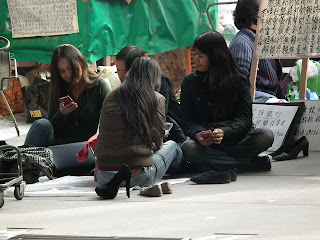 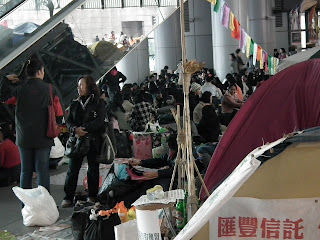