>Double click on the image to enlarge it to read. 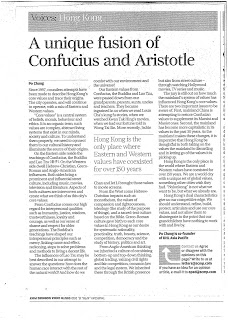 Po Chung funds the Fulbright program under which I work. He has interesting ideas about Hong Kong’s unique position.

As someone recently reflected–Hong Kong has the British rule of law, and the best of Chinese sense of obedience to laws and hard work. Macau has the worst of Iberian culture in terms of work ethic and the worst of Chinese nepotism and corruption. What happens when two cultures meet?

In Southern Louisiana, the Houma tribe has been left without a treaty because they didn’t conflict strongly enough with colonial powers–they remain without the legal status that a treaty would have established.

When I lived in New Zealand I spent time trying to figure out the roots of New Zealand culture. It is a physically aggressive and competitive culture–is this the influence of South Pacific, Maori warrior culture or as someone suggested to me, the brutality of English boarding school culture? Or did the two resonate with other, amplifying its influence. The suicide rate amongst young men that do not fit this norm is very high.

Japanese culture is known for its ability to bend to outside influences but remain the same underneath. The Frontline film, American Game, Japanese Rules illustrates among a variety of things, how baseball is played in Japan. It looks like baseball but it isn’t. When a player does too well, the strike zone expands to even things out. When one team gets too far ahead or one individual gets too much attention, then they are pulled back. They play for a tie.

The African-American author, James Baldwin told of an experience of living in Paris. While there he had an encounter with an black African and then a white American from Georgia. He concluded that he had more in common with the white Georgian because of the history of white-black conflict in the U.S.–it had shaped who we have become as Americans. Out of the country’s struggle over slavery and racial inequality we have become who we are. Sometimes it is in being forced to confront the worst in ourselves that we are given the opportunity to shape ourselves into something better–or not.