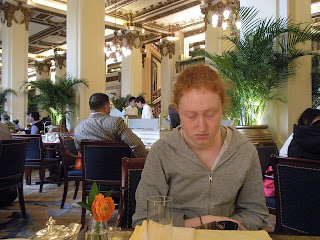 Film is big here. This past week I went to the premier of a documentary on the life of Nancy Kwan. She was on of the first Asian actresses to actually portray an Asian lead lead in a Hollywood movie. Prior to her first film, “The World of Suzie Wong,” such roles were played by westerners–think of the Charlie Chan movies! Another early movie with Nancy Kwan was “To Whom it May Concern: Ka Shen’s Journey.” Both of these film show complexity and depth in an Asian character–something that was very unusual in the 1950s and early 1960s. I recommend them! Nancy Kwan was at the premier of the documentary.

It must have been film week because when I took my two daughters to The Peninsula Hotel to experience high tea, we sat at a table next to actor, Chow Yun Fat. He appeared in “Anna and the King,” “Bullet-proof Monk,” “Crouching Tiger, Hidden Dragon.”

These two experiences framed the week 🙂