I have always looked for self understanding and identity in the landscapes and places out of which my family grew.  On a trip with my mother and grandmother in 1981, we went west from Minnesota, all the way to Oregon and Washington, visiting my mother’s cousins who had been scattered along the route during the depression.  My mother had not seen many of them since she was a child, yet we found echos of her father’s family in them–everything from their noses to musical ability and valuing education.  I didn’t “know” them yet we were invited to stay and I saw echoes of who I was, in who they were.

I have found myself helping my daughters see themselves through travel.When my older daughter was in grade school, she was struggling with issues related to her father’s family and her identity. My response was to take her on a trip to explore who she was.  We traveled from Iowa, where we lived, through Ames, Iowa where we looked for the brick with the name of my grandmother engraved on it in the Plaza of Heroines at the Catt Center at Iowa State University.  I had placed it there in honor of my grandmother who had come from Iowa and encouraged her daughters and granddaughters and great granddaughters to be who they were.  We traveled on to southwest Minnesota, and met great aunts and uncles, visited cemeteries to see the names of my daughter’s great grandparents and great great grandparents.  We knocked on the door of the house where my father grew up and where my family lived with my grandmother for a year when I was 6 years old.  The present owner let us wander through the house as I recalled what it was like at the time I lived there.  I wanted my daughter to understand and know that she came from somewhere and had deep roots and connections to both place and family.

This same daughter went with me to Scotland for a conference many years later.  We learned about lowland Scots culture–the origins of public education, the egalitarian culture that encouraged the establishment of local organization of different kinds, and other values that went on to shape American culture.  These values and the culture resonated with my family which has Scottish roots.  This side of the family came to Pennsylvania  with very limited resources.  They moved west with opportunity and valued education.  When they settled on the prairies of Minnesota in the 1860s they quickly established a public school and a church for example. And of course, in Scotland we saw red hair and freckles, just like my younger daughter.

On a beautiful fall Saturday recently I went looking for myself in the New England landscape.  This took me to Chelmsford, the town where the English side of my family settled in the 1650s.  A local resident, who descended from a common ancestor, met me there to show me around (so we might have been something like 9th cousins, or first cousins, 9 times removed?).

The Old Burying Ground in Chelmsford, Mass, is at the center of the settled, which has a traditional New England form.  A common or “green” is at the center with a church on one side and usually a meeting house or local government building on another. 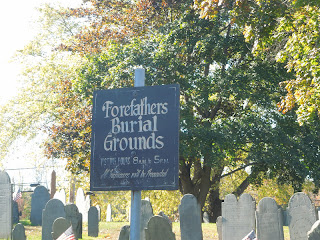 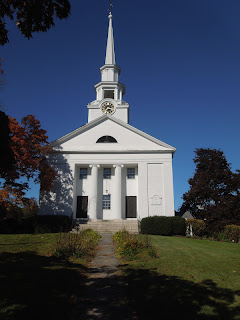 The cemetery was full of my ancestors’ graves, but I struggled to find an echo of myself.   I heard about the power of established families.  And I saw last names that had been associated with a place for more than 350 years.  The descendents of these people were still here while my part of the family had moved west.  Probably my ancestors were relatively well educated and perhaps worked for the King.  They might have been in Jamestown or in the Caribbean before coming to Chelmsford.

It was interesting.  Maybe good material for a cocktail party.  But it didn’t resonate with my identity.  I come from an egalitarian, westward moving family.  My grandmother cleaned houses to make money.

Why did Scotland resonate with me but not Chelmsford?  They are equidistant in the past. Why do some traits and identities get passed on across time and space, but not others?  If I was a believer in the Turner Thesis I would say that is was the experience of westward movement and its associated challenges that made the difference, but that still doesn’t explain Scotland, but not Chelmsford.

In two weeks, my older daughter comes to visit.  We are going to visit Chelmsford.  I’m going to watch her reaction carefully. 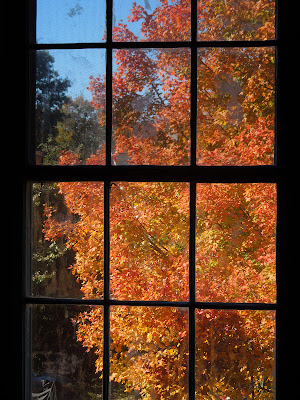