I am used to pretty wild storms.  After all, I have lived in the Midwest most of my life where storms can be violent.

I woke up to windier conditions telling me that Sandy was coming.  I needed to get out and do a few things this morning but it wasn’t bad at all.  I decided to go look at the beach.  The waves were building.  In the harbor areas the boats had been pulled in and out of the water, leaving the area looking abandoned.

By the time I headed home after working in my office around noon, twigs and leaves were on the roads, but people were still out jogging.

Now, at 3 p.m., it is getting crazy.  The leaves are being blown off the trees and my windows are covered with water blown against it the wind whistles like the winds of a big winter storm.  And I just got the message that one of the dormitories at Gordon has to be evacuated due to high winds and risk of falling limbs.  Students are being moved to another dormitory.

There is a clash between the two weather systems over the state of Massachusetts.  Temperatures remain quite warm meaning lots of energy.  So though we aren’t near the middle of the hurricane, it is now 1500 miles across.  Gusts almost 70 miles.  And more to come. Another dorm has just been evacuated.   I think I get to add to my life list of natural events. 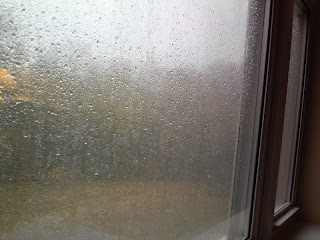