Out of this tale, Verghese’s character in his novel tells his sons that the slippers in the story represent everything you see and do that must be “owned.”  In one of the most moving statements in the novel, his character tells his sons:  “…own your slippers, own who you are, own how you look, own your family, own the talents you have, and own the ones you don’t.  If you keep saying your slippers aren’t yours, then you’ll die searching, you’ll die bitter, always felling you were promised more.  Not only our actions, but also our omissions, become our destiny.” (page 350-351).

In the same way, we must each own where we come from.  We are the embodiment of the places where we have experienced life.  Often people try to deny the places that nurtured them (or not), by changing their accents, distancing themselves from the people that shared their lives in particular places, or ignoring particular periods of their lives by denying their memory.  But in the end, if we are to be fully who we are, we must own the memory, experiences, and senses of the places that shaped us.

For me this includes seeing and smelling the red clay earth of North Carolina and sensing the tension around the topic of the Civil War 100 years after its end;  the smell and feeling of 100 percent humidity in the marshes of Louisiana as I heard the sounds of Cajun French;  the regulation of life shaped by the International Harvester plant whistle in the factory town where I grew up and the desperate need to get away;  the difficulty of breathing under the constraints of the rigidity of an ethnic Iowa town;  the site of the Norfolk pines and cabbage trees in New Zealand;  storms and lightening across open landscapes;  hot, humid summer days where it was said that you could watch the corn grow;  the browns, greens, blues, and yellows of the rural fields and homesteads of Ontario and Swan River;   the damp, cool indoor temperatures of the UK; the Great Lakes in winter and in summer from Niagara Falls to the North Shore of Lake Superior to the dunes of Lake Michigan;  the crowds, lights, and food of Hong Kong.

This region has an informal rule of the road to which I have been adjusting.  I have to adjust because if I don’t follow it, then other drivers get irritated, even though following the rule actually breaks the law.

When you come to a stop at an intersection, where the cross traffic has the right of way, drivers on this main artery, who are going to talk a left turn onto the road where you are sitting, will stop and waive you to go first across the intersection in front of them before they turn.  In spite of being dangerous, if you don’t do as they request, they get irritated as you sense you are not responding to their helpfulness.

And if you don’t do the same for others, they think you rude. 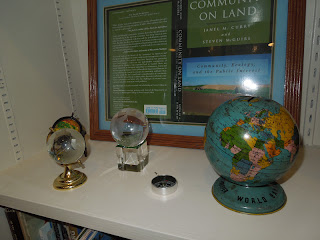 I have been navigating in new space.  I have gone to the airport three times and gotten lost three times, even with my newly purchased GPS.  Finally after the third time, someone here said to me–oh, by the way, a GPS doesn’t do well getting you to the airport.

I had been resisting getting a GPS because I’ve felt like it makes people too dependent on point by point instructions rather than developing a mental map of an area.  As a geographer I am more interested in developing a sense of the organization of a place, its spatial layout, rather than just point by point directions associated with one trip to one particular place.  I need to build my capacity to navigate in my new space rather than just take the shortest route necessary to get to the closest Starbucks.

So I have become self-conscious of my own learning. The first few weeks I used the GPS to get to particular places.  But I would also then go back home and look at a map so I could see the orientation of the route.  I needed to know what direction I was traveling when I made the turns directed by the GPS, trying to build up the view from above and see the relationships between places.

One of the earliest Saturdays, I actually used the map and walked a 4 mile route from my apartment to the local shopping area and back.  This helped me pay attention to landmarks and turns because I walked the route and experienced it at street level.

After almost a month, I am doing better in finding my way around without using the GPS.  Or the GPS will tell me to go one way and I will actually choose to go another–no longer is it ordering me around, but rather I am in control of my destiny and the GPS is my aid rather than my guide.

This process of learning has been very different that my previous experiences with acclimating to new spaces. Of course in the Midwest, your best course of action is to orient yourself by learning the major north-south and east-west arteries, all of which are usually one mile apart.  This is a pattern laid down by the Rectangular land survey system west of the original 13 colonies.  Thank you, Thomas Jefferson!  It is a very rational, deist type of system which has even evolved into a typical pattern of numbered streets that tell you where you are relative to the city center, or streets that run in order of the alphabet.  Minneapolis uses may of these strategies–France comes before Xerxes and numbered avenues run one direction and numbered streets the other direction.  The grid pattern can be an amazing thing, especially on a landscape that is primarily horizontal in orientation with very little change in terrain. 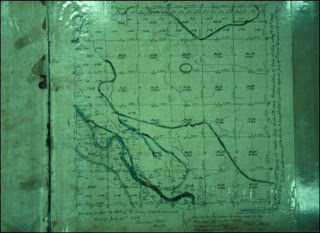 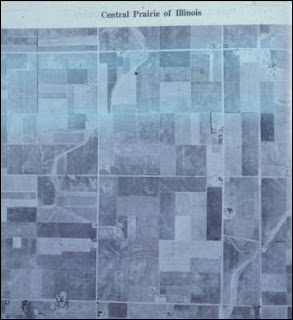 In Hong Kong I used public transportation.  I depended on my detailed street map book, and supplemented it with another street map book that also had air photos to show terrain–it is a three dimensional space .  The book showed the lettered subway exits so that you could make sure you came above ground at the correct spot and on the intended side of a  major street.  But disorientation came from not being sure which direction you needed to turn to get to your destination when you came up from below.  A colleague added a compass to her arsenal which oriented her when she came up from below.  The first time I lived in Hong Kong I did not leave my apartment without my street map book.  It had key places circled.  It had my bus numbers written down and where to catch them.  It was my tether to my home base.  But the second time I lived in Hong Kong, I found at times I was just forgetting to put it in my bag.  I was not needing my crutch as often as my larger mental map got filled in. 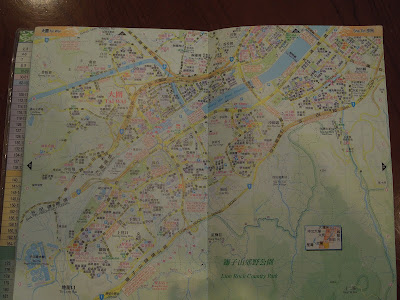 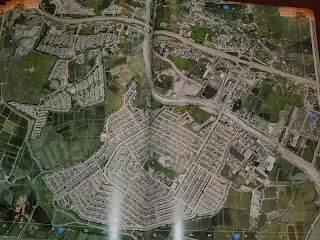 In the midst of my most recent spatial learning curve, a colleague here brought in some family items to show me.  They were silk maps used by paratroopers during WWII.  They were given these maps and a compass.  I had never thought about the challenge of navigation in these conditions and the tools that might have been provided.  Within my mother’s lifetime (actually within my lifetime) we have gone from orienting ourselves with the use of printed maps and compasses to looking at an individual streets using satellite images, navigating by using GPS, and downloading directions using mapquest. 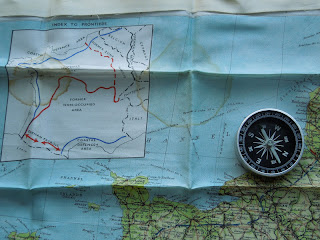 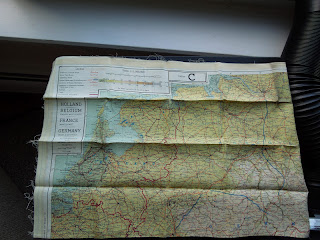 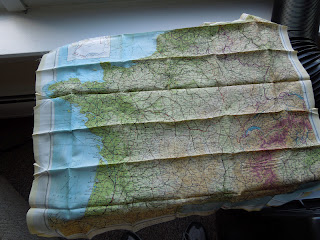 Technology changes, but in the end, it is all the same necessary process–becoming comfortable in a new place through developing an ability to find our way home.

And by the way, I have discovered that one of the greatest uses of GPS is not to help you get some place, but rather to get you home when you’ve gotten lost.  So my recommendation is to go get lost and explore without fear, as long as your GPS is close by.  But this does not work if you are near Logan International Airport.